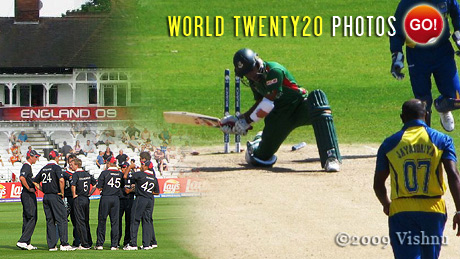 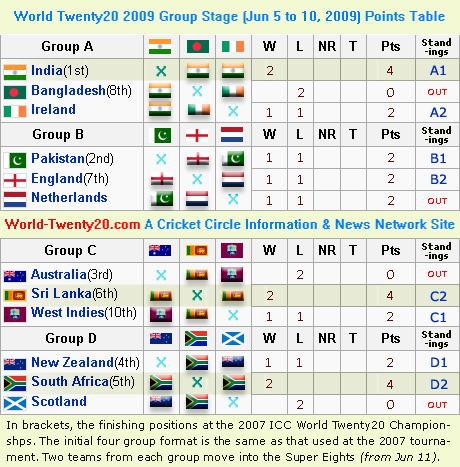 India cruised away to an eight-wicket victory against Ireland with another strong first wicket partnership in their last Group A match at Nottingham. Gambhir, 37 and Rohit Sharma, 52 took India off to a solid start scoring 77 runs in 65 balls.
Ireland could only put 112 runs on board as Zaheer khan took 4 wickets for just 19 runs in his rain-shortened quota of 3 overs. He was named the Man of the Match.

Jayasuriya entertained the Trent Bridge crowd with explosive hits, and put 81 runs in his name off only 47 balls, in an innings that overshadowed Dilshan's second half-century of the tournament in as many matches.
West Indian batsman, in Chris Gayle's absence, couldn't put up a useful fight, eventhough they raced to 65 for 1 after just six overs. Sarwan played 26 balls, scoring 28, without a single hit to the boundary. He and Pollard started the final over needing 28 but managed only 12.

Electing to field first, the New Zealand bowlers were successful in limiting South Africa to a low score of only 128/7. Ian Butler (4-0-13-2) and Nathan McCullum (4-0-18-1) deserve notable mention in this performance by New Zealand. Graeme Smith(33) and Jean-Paul Duminy(29) were the high-scorers for South Africa. However, the New Zealand batsmen were unable to convert the good performance by their bowlers into a victory. Brendan McCullum gave his team a solid start by scoring 57 runs off 53 balls. But the New Zealand innings lacked momentum and from 2-26in 3 overs, they reached only 3-82 in 14 overs. They needed 2 runs from the last ball to win, but instead lost the wicket of Oram in a run out. New Zealnd were able to take only 127/5 in 20 overs. Van der Merwe was the most successsful bowler for South Africa, taking 2 wickets , giving away only 14 runs and earned the title of Player of the match.

Indian opener Virender Sehwag has been ruled out of the World Twenty20 cricket due to a shoulder injury and will return home after consulting medical experts in England. Sehwag sustained the injury while playing in the second edition of IPL held in South Africa.
Dinesh Karthik, a batsman-wicketkeeper, has been called into the squad as Sehwag's replacement. India, which plays Ireland at Trent Bridge on Wednesday, has already qualified for the Super 8 stage after beating Bangladesh in its opening game.

Comprehensive victory for Pakistan at Lord's

Pakistan needed to beat the dark horses Netherlands by a 25 run margin if they wanted to stay alive in the World Twenty20. And they demolished the men in orange by 82 runs.
Pakistan, who were low in their confidence after losing their game against England by 48 runs, looked lost till the middle overs, when Afridi started picking up wickets in quick succession. His 4 wickets in 4 overs giving away just 11 runs made sure they move into the Super 8s with England from the same group. Man of the match Kamran Akmal effected 4 stumpings, 1 run out and scored 41 off 30 balls in a Pakistan score of 175/5.

Australia knocked out of World Twenty20‎

Sri Lanka's six-wicket victory at Trent Bridge over Australia meant the Aussies are out of the ICC World Twenty20 and will have more time to practice for the upcoming Ashes. Kumar Sangakkara played a captain's innings, steadying the innings whenever the Australians tried to crawl back into the game. His 55 not out in 42 balls had six shots to the boundary including 2 sixes at crucial moments. Sri Lanka booked a berth in the Super Eights with five balls to spare. Tillakaratne Dilshan hit 53 off 32 balls, making sure Sri Lanka were always comfortably paced, chasing Australia's 159/9.

Bangladesh crashes out of the World Twenty20

Ireland beat Bangladesh just like they did in the 2007 World Cup in West Indies, and moved into the second stage of the World Twenty20 at the expense of Bangladesh. Bangladesh started with a bang, hitting 30 of their first 39 runs in boundaries, but lost wickets at regular intervals to end their innings with a modest 137/8.
In reply, Ireland reached 138 for four with 10 balls remaining following an aggressive exhibition of hitting from Kevin O'Brien. His unbeaten 39 from 17 deliveries included four fours and two sixes.
Ireland will now join India in the Super 8's from Group A.

England crushed Pakistan by 48 runs in a group B death match after messing up their tournament opener with minnows Dutch. Kevin Pietersen, returning to the side after losing the match against the Dutch, hit 58 off 38 balls to help his team reach 185 for 5.
In reply, Pakistan's batting was lackluster, and no one seemed interested in putting up a fight. Younis Khan top scored with 46, while Broad picked up 3 wickets for 17 in 3 overs.

South Africa asserted their superiority in every area of the game and gave the inexperienced Scottish side a massive thrashing when they defeated them by 130 runs . Batting first, South Africa were off to a good start with Graeme Smith (38) and Jacque Kallis (48) laying the ground work for their innings. AB de Villiers remained not out after scoring a dynamic 79 off only 35 balls . South Africa amassed 211/5, the highest total by any team in this tournament so far. The Scotland innings crumbled from the very beginning and they were 13/4 after 3 overs. Coetzer (42) and Haq(15) were the only two players whose scores were in double-digits. Scotland were bowled out for 81, in 15.4 overs. For South Africa, Botha and van der Merwe both took 2 wickets each giving away 17 runs in 4 overs.

India overcame a hardworking Bangladesh line-up in a Group A encounter at Nottingham, riding on Yuvraj's quickfire 41 off 18 balls, and Man-of-the-match Ojah's 4 wickets in 4 overs.
India were dawdling along in the middle overs as Dhoni and Gambhir struggled to find boundaries. Yuvraj hit 4 sixes and 3 fours to take India from 112 to 157 in under 4 overs.
This was the first Twenty20 meeting between India and Bangladesh.

Just a month ago, West Indies skipper Chris Gayle caused a storm when he said said he preferred limited overs games to Test cricket as his side slipped to a series defeat in England. Today he caused another storm, this time with his bat, as he led from the front to thrash Australia by seven wickets in the World Twenty20 Group C opener at the Oval.
Chasing 170 for victory, Gayle hit six sixes and six boundaries, while scoring 88, as he and Andre Fletcher put on 133 in just 69 balls to all but seal victory.

In a rain shortened match, Scotland looked as though they were aiming for the second big upset of the tournament in as many matches, but Jesse Ryder 31 (12 balls, 3 4s, 2 6s) and Ross Taylor 21* (10 balls, 1 4s, 2 6s) spoiled their day.
The 90 runs New Zealand needed to overcome Scotland looked massive before they started batting, but the heavy hitters made sure they reached the target in style with an over to spare.

Netherlands beat England by four wickets in the opening match of the ICC World Twenty20 at Lord's in a Group B match. Needing seven off the last over Ryan ten Doeschate and Edgar Schiferli took 5 singles, and then on an overthrow by bowler Stuart Board, ran the two needed for a famous victory.
Man of the match Tom de Grooth hit 49 off 30 balls and got plenty of support from Borren, 30 off 25, and ten Doeschate, 22 off 17.

Australia all-rounder Andrew Symonds is being sent home from the Twenty20 World Cup in England for another off-field incident relating to alcohol. Cricket's bad boy broke team rules by having late night drinking sessions and failing to inform teammates of his whereabouts during Australia's Twenty20 World Cup preparations.
Symonds will arrive back in Brisbane with his international career effectively over and no guarantee he will return to the cricket field.
Cricket Australia chief executive James Sutherland said "In the last 24-48 hours he has broken a number of team rules. In the context of commitments Andrew has made to his teammates and to Cricket Australia in the last six months, it's the last straw. Unfortunately, it's a constant balancing act and it's just tipped too far today."Victoria allrounder Cameron White is believed to be on standby to replace Symonds, subject to ICC approval.

See the news and results from the warm-up matches in England.
India captain Mahendra Singh Dhoni led the tournament favourites to an impressive nine-wicket win over fellow 2007 finalists Pakistan in Wednesday's (June 3rd) final warm-up match, and the stage is set for the first 'real' match at Lord's on Friday, as Hosts England open up against the Netherlands in the first of their two Group B matches, with Pakistan set to face England at The Oval on Sunday.
In earlier warm-up matches, India lost to New Zealand, and Pakistan to South Africa, both on June 1st. New Zealand was the most promising team, winning four of their five matches. Their sole loss was against Australia, by 7 wkts. Australia and South Africa, both on the other hand played just 2, and won both games.
Bangladesh beat Netherlands and Scotland, and lost against Sri Lanka, Australia and New Zealand. Sri Lanka played two, lost one against South Africa.West Indies played four, lost only one, against England. England played two, one two. Scotland, Ireland and Netherlands won one game each. They all lost to test playing teams. Detailed Warm-up games news and scorecards.