The 2009 ICC World Twenty20 is the World Championship for Cricket in the Twenty20 format. There are 12 teams competing in the Group Stages. The first two placed teams from each of the four groups (Group A to D) will move on to the Super Eights. Each team plays three games against teams they have not already played. (Teams divided into Group E and Group F). Fixtures are predetermined and have no connection to who finished first and second in the group. No points are carried forward from group stages. Top two teams in Groups E and F qualify for semi-finals. 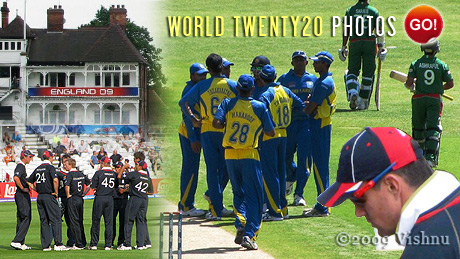 See below for latest news and results from the warm-up matches in England. Winners in BOLD.

In the final warm-up game, India beat Pakistan in an emphatic fashion in front of a packed house at the Oval. Pakistan started strongly, with the young Ahmed Shehzad scoring 25 off 19 balls with 5 fours, but Ishant Sharma's first over, a 2 wicket maiden, changed the course of the game.
India, riding on the first wicket partnership of 140 between Rohit Sharma and Gautam Gambhir in 16 overs, took the match away from a wayward Pakistan attack.

Alexei Kervezee (62) led a calm chase for the Netherlands, never letting the asking-rate get out of hand, and his century stand with Bas Zuiderent (46) shut out Scotland who had made 128 for 9 in their alloted 20 overs.

Sri Lanka batted as if they were in a drunken stupor and were 44 for 7 at the halfway mark of their innings, after being sent in to bat first. They managed to reach a disappointing total of 109 for 9, which the South Africans could overtake only in the last over. A third-wicket stand of 70 between Herschelle Gibbs and AB de Villiers was the highlight of the game.

England raced to a nine-wicket win with 32 balls remaining, riding on the opening stand of 119 between Luke Wright and Ravi Bopara. Ravi Bopara hit a 35-ball 60 before falling in the 12th over when the score was 119.

Mitchell Johnson rocked New Zealand's top order with 4 for 20 and a run out, but Styris and McGlashan helped New Zealand reach a healthy 147. Ricky Ponting cracked a 40-ball 56 as Australia reached their target of 148 with four balls to spare. Clarke was not out on 49 from 38 balls.

Sri Lanka overcame the charged-up Tigers and nerves to register a four wicket victory with 2 balls remaining at Nottingham.
Chasing a target of 151 set by Bangladesh, Sri Lanka were cruising at one stage with 100 for the loss of two wickets in the 11 over.

Chasing 130 set by Ireland, West Indies' Gayle took the game away with an explosive 88, to win with four overs to spare and nine wickets in hand.

New Zealand's unbeaten record against India in Twenty20s continued as they beat the world champions by nine runs. India took the field without Virender Sehwag and Zaheer Khan. Yuvraj Singh also did not play although he was on the team sheet. Rohit Sharma, Suresh Raina and Ravindra Jadeja batted well to challenge New Zealand's total of 170, but Dhoni, Gambhir, Yousuf disappointed the passionate Indian crowd at Lord's.

South Africa played better in every department of the game to beat last year's runner-up Pakistan comprehensively at Trent Bridge.

Ireland beat Netherlands in the super over after both teams tied the scores during regular overs. Netherlands needed only seven in the eliminator to win the game, but Trent Johnston had Bas Zuiderent stumped off the third ball and ran out Darron Reekers off the next to end the Netherlands innings.

New Zealand easily beat Netherlands by 90 runs in their last training match at Wormsley. The Netherlands were dismissed for 104 in the final over of the match in reply to New Zealand's 194 for 8.
Brendon McCullum top scored with 62 to set up the strong total.

Rubel Hossain, with the remarkable figures of 5 for 16 in 4 overs helped Bangladesh keep the spirited Scotland in check. Scotland batted through their 20 overs to post a respectable 141 for 7, but Bangladesh were victors with six wickets and eight balls to spare.

Lionel Baker 3-22 and Darren Sammy 2-8 restricted Ireland to a modest 119, which was chased down easily by the West Indies with two overs to spare. After Ramnaresh Sarwan opened for West Indies and failed, scoring only 6 runs, West Indies were at 60 for 4 at one stage.

Mohammad Ashraful (69 off 40) and Mohammad Mahmudullah (56 off 34) both scored half-centuries to set up a convincing 64-run for Bangladesh over the Netherlands in an ICC World Twenty20 wam-up game in Canterbury. Tigers reached 206 for six scoring over 10 runs per over.
The Netherlands lost wickets at regular intervals, and were bowled out for 142. Borren top scored with 40 off 22 balls. Pace bowler Rubel Hossain picked up four wickets for the Tigers.

Bravo (51 not out off 30) and Fletcher (42 off 34) top scored for West Indies and helped them reach the moderate score of 143 for 6 wickets in 20 overs after being sent in to bat by Scotland. Wicket keeper Colin Smith hit 40 in as many balls, but Scotland failed to reach the target, ending their chase at 129 for 9 wickets. Fraser Watts and Neil McCallum both made 22.
For West Indies, Sammy took 3 wickets in 3 overs giving away 25 runs.

Ross Taylor was instrumental in taking New Zealand to a seven-wicket win over Ireland in an unofficial warm-up match for the ICC World Twenty20 2009.
Jeremy Bray was the top scorer for Ireland with 48 off 47 balls, and Ireland, who batted first, made a total of 152-5. For Newzealand, Jesse Ryder took three wickets.
Ross Taylor's amazing 74 off just 36 balls was the highlight of the Newzealand innings, and New Zealand reached their target with three overs remaining. Connell closed with figures of two for 19 but New Zealand were still able to get home with three overs to spare.

After winning the toss and electing to bat, Mahmudullah top scored for the Tigers with 43 and all-rounder Shakib Al Hasan chipped in with 35 as they posted a useful 146 for six in twenty overs.
New Zealand started brightly with Guptill (61 off 42) and McGlashan (35 off 35) batting carefully, before they began losing wickets. Nathan McCullum with an unbeaten 15 delivered the winning blow on the last ball.