The inaugural Twenty20 World cup final, on Monday, is a marketing man's dream - with Pakistan taking on India.
India held its nerve against a brave charge by Australia to win the spectacle by a handsome margin of 15 runs after setting a target of 189 while earlier in the day, Umar Gul's sensational seam bowling and Imran Nazir's half-century ensured Pakistan the first spot in the ICC World Twenty20 final at New Zealand's expense. Chasing a target of 144 runs, after a combination of poor batting and excellent bowling restricted New Zealand to 143-8 from their 20 overs, Pakistan won the semi-final encounter at the Newlands cricket ground in Cape Town by six wickets after knocking off 147 runs in 18.5 overs. A middle order collapse had cost New Zealand vital runs after a promising start, Ross Taylor top-scoring with 37. At Durban, brilliant left-hander Yuvraj Singh hit 70 off just 30 balls as India won the toss and recovered spectacularly from a sluggish start to total 188-5. Australia crumbled when 30 were needed from the last three to end on 173-7. 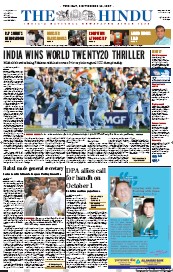 India beat arch-rivals Pakistan by five runs in a thrilling contest to win the inaugral Twenty20 World Cup at Johannesburg on Monday.
Defending a modest 158, RP Singh struck first up to scalp Mohammad Hafeez for one run and give India a kickstart. He struck in his successive over to uproot Kamran Akmal for a duck. At that point of time, Pakistan's scorecard read 26 for 2 in 2.3 overs.
Imran Nazir then hammered Indian bowlers all over the ground and soon Pakistan were cruising as they crossed 50 run mark in 6th over with the loss of 2 wickets.
But a splendid direct hit from Robin Uthappa ended Nazirs run at Wanderers. Nazir was caught napping way outside the crease. Nazir was run out on the score of 33 runs from 14 balls. India were riding on high note against Pakistan as they claimed wickets at regular wickets to derail Pakistans attack.
This time Shoaib Malik and Shahid Afridi were sent of in a hurry by Irfan Pathan. Pathan struck on 3rd and 5th ball of his over to dismiss the two batsman. While Shoaib made just 8 runs, Afridi was out on duck. Pathan claimed his third wicket when he cleaned bowled Yasir Arfat for 14.
Earlier, India were restricted to a modest total of 157 runs by Pakistan. Indian top order crumbled under the fiery attack of Pakistan seamers. But it was a hard fought innings of 75 runs from Gautam Gambhir that boosted Indian total to a modest score. Gambhir's fifty came of just 39 balls. He was caught by Shoaib Malik off the bowling of Mohammad Asif. Umar Gul, with his match figures of 4-0-28-3 was the best bowlers of the day. He dimissed the key wickets of India captain Mahendra Singh Dhoni and Yuvraj Singh. Yuvraj made 14 runs from 19 balls. Reported EarlierIndia captain Mahendra Dhoni won the toss and elected to bat in the ICC World Twenty20 final against Pakistan.
India suffered a blow when they had to bring Yusuf Pathan in for Virender Sehwag after the opener failed to recover from his groin problem. Pakistan also made one change to their semi-final line-up, Yasir Arafat coming in for fellow all-rounder Fawad Alam. Pre-Match Report: India and Pakistan aim to provide the inaugural ICC World Twenty20 with an exciting climax when they meet in the final at Johannesburg on Monday.
The two sides played out a dramatic tie earlier in the tournament, with India coming out on top after a bowl-out. "There is nothing more exciting than an India-Pakistan match, so expect some fun," said skipper Mahendra Dhoni.
India will again hope for fireworks from Yuvraj Singh, while Pakistan will look to Shoaib Malik and Misbah-ul-Haq. The middle-order pair have been one of the main reasons for Pakistan's success in the tournament so far, although team-mate Shahid Afridi heads the overall player of the tournament standings for his 91 runs and 12 wickets.
The players of both the sides have redeemed the reputations of their teams after both were eliminated from the World Cup earlier this year after the opening round. "The World Cup is history and we are just concentrating on this final. Things have been going very nicely and we are playing much better." said Pakistan captain Shoaib Malik. India Team (from): Mahendra Dhoni (captain, wk), Dinesh Karthik, Ajit Agarkar, Gautam Gambhir, Harbhajan Singh, Joginder Sharma, Irfan Pathan, Yusuf Pathan, Piyush Chawla, Virender Sehwag, Rohit Sharma, Rudra Pratap Singh, Sree Santh, Robin Uthappa, Yuvraj Singh.
Pakistan Team (from): Shoaib Malik (Captain), Kamran Akmal (Wicket Keeper), Abdur Rehman, Fawad Alam, Iftikhar Anjum, Imran Nazir, Misbah-ul-Haq, Mohammad Asif, Mohammad Hafeez, Salman Butt, Shahid Afridi, Sohail Tanvir, Umar Gul, Yasir Arafat, Younus Khan.

India won the toss and decided to bat


Pakistan Innings - All out